After endless statements from Government and revolving door Housing Ministers promising leasehold reform, all leaseholder’s eyes were on the government. We had a plethora of promises, statements from MPs, ministers and even the Queen promising that they would take action for leaseholders but up to now no action had actually been taken. Would 2019 the year that leaseholders finally got some help?

This is my leasehold review for the year.

It didn’t get off to the best start.

For the last few months of 2018 leaseholders had spent many many hours filling in endless and sometime incomprehensible consultations from the Law Commission and the Ministry of Housing Communities and Local Government (MHCLG). However, they were determined that their voices would be heard, and they persevered. It was therefore crushing when many who had submitted their responses to MHCLG received emails from them stating their responses only contained their names and addresses and the body of their responses had not been saved. They would have to do it all over again, me included. Sigh.

We were promised that the Law Commission’s recommendations to Government would be issued in October 2019. This was then pushed back to November and then a contentious election has pushed the release date back to January 2020. Will it be worth the wait?

Changes at the top of LEASE made us hopeful as they had experienced a veritable barrage of criticism from leaseholders for advising freeholders on how to maximise their profits against  them. The government though had then instructed LEASE, in no uncertain terms, that they must now shift their focus to help leaseholders only. Following this, in January, it was announced that there was a new interim chair at LEASE, Wanda Goldwag. Would this be enough to make LEASE the powerful resource for leaseholders it should be?

Wanda immediately sailed into controversy when as a guest on BBC R4’s “You and Yours’ where she refused to endorse that the government should ensure all future ground rents should be peppercorn but instead she weakly stated that ‘contracts should be fair’. Disappointing! Why would a body acting for leaseholders alone refuse to denounce ground rents, the very bedrock of leasehold abuses? Later in the year, in a fractious meeting between Wanda and LKP, the only organisation truly on the side of leaseholders, the relationship between them broke down even further and that’s where it remains.

We did however take some solace from the freeholders themselves. Freeholders like to live in the shadows hiding their portfolios in complex intra-company structures or in impenetrable offshore companies. As they are usually figures of disdain, they rarely seek out publicity. It was therefore strangely uplifting when the sheer weight of the criticism they received eventually drew statements from them as they tried to justify leasehold. We were clearly getting to them.

We managed to draw a response from the he ‘archetypal villain’ freeholder Vincent Tchenguiz, one of the largest freeholders in the UK. He whined that if the Government did reform leasehold it would have “unintended detrimental consequences to the entire property market”. He didn’t add that also his highly leveraged ground rent empire may also suddenly become moribund.

Peter Sugarman, of the JRJ Group also raised his head above the parapet. He stated that while he deplored unethical leasehold practices it would be a mistake to introduce commonhold, which works across the rest of the world, into this country. His sole argument for this being that we Brits are “fundamentally different” to other countries. He continued “Institutional investors are therefore happy to take on the long-term responsibility for caring for buildings, in return for a modest annual ground rent (say 0.1 per cent of capital value), rising every ten years in line with inflation.” I bet they are. They make a fortune from this leasehold lark and from our experience very little ‘caring’ is ever in evidence in the managing of buildings from Institutional investors. The very fact that freeholders say the need to make statements at all though show that they were getting worried about the future of their lucrative business model.

Finally, leaseholders did have something to cheer in 2019. The long-promised select committee on leasehold abuses was finally started and we got to watch the developers squirm under bullseye questioning from the redoubtable Clive Betts and his team. For the first time this year leaseholders began to feel hope that there would be an end to their leasehold nightmare.

This was quickly squashed though when it was the turn of the housing minister Heather Wheeler to be questioned.  As leaseholders across the country fell off their chairs in shock, a smirking Wheeler dismissed any claims of mis-selling of leasehold houses. She also claimed any retrospective change in legislation would ‘trigger a horrendously expensive wave of compensation claims’. It got worse. She claimed the people really to blame for the scandal were the leaseholders themselves as they had been ‘caught up in the moment’ and ‘excited’ when they signed leases for first homes and hence didn’t look at the details of what they were buying. Was that really the belief of Government?

She had a much better way to end leasehold abuses though she said, a Freeholder’s charter, a voluntary 14-point pledge designed to end the practice of unfair and onerous leaseholds. 40 house builders and developers rushed to sign it, as self-regulation was clearly preferable to legislation change. She was smugly self-satisfied with her idea, but leaseholders weren’t fooled for a second.

After claiming not to have the time because of Brexit, pressure from the select committee managed to get the Competition & Markets Authority (CMA) to launch an investigation into mis-selling of leasehold properties. It said it will examine whether the most onerous leasehold terms, such as permission fees and doubling ground rents, might constitute ‘unfair terms’ as legally defined and therefore not enforceable. 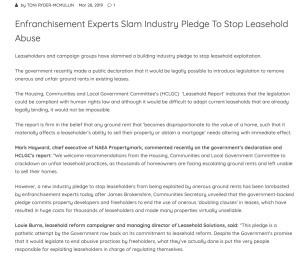 Following on the heels of Wheelers’ shameful performance we found that the most vulnerable leaseholders would be excluded from the benefits of any legislation changes. Powerful lobbyists from the retirement sector had managed to pursued government that high ground rents, excessive service charges and event fees which make retirement properties virtually valueless were essential to their business model. Personally, this has been the most distressing piece of news for the year. It seems to be perfectly acceptable to use people who have worked, paid tax and saved their whole lives as a legitimate form of profit making. Shocking. In her post-election Queen’s speech, she promised ‘dignity in old age’ but not, it seems, if they are leaseholders.

Every time the current housing ministers fancied getting their faces in the paper, they promised leasehold reform action ‘any time’ or sometimes ‘within weeks’. We note with interest though that two years on there has been no legislation change, not one bit.

In the wake of the heart-breaking Grenfell tragedy, the scale of how many other blocks of flats contained dangerously unsafe cladding was revealed. It was staggering! With LKP at the forefront of a campaign, the government announced a £200m Grenfell cladding removal fund to help leaseholders. The majority of freeholders were quick to distance themselves from any liability and cost for removing the cladding. Although freeholders are quick to point out they are the actual owners of the buildings it seems that doesn’t stretch to paying for any faults.

Instead they insisted that the costs should fall, as ever, to the leaseholders. However, leaseholders were not involved in the construction of their flats. They had no say or influence in the materials used in their construction. They were not present when planning officials signed off the works and materials as being safe and up to standard. They bought their flats in good faith. Trusting that the developer used only safe materials and that the building would only be signed off by planning officials only if they were up to standard.

They now find themselves as the ones left holding the can, conned by a process they had absolutely no involvement in. They are told that they must pay the many millions of pounds required to make their home safe. 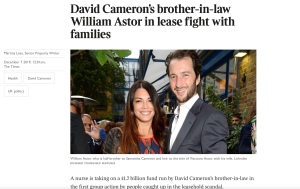 Our country was brought to a standstill by a house of commons Brexit stalemate and an election was well and truly in the air. Soon most of the political parties were making the right noises about leasehold reform. This was very encouraging as in history, the most meaningful reform has come when all parties have ran on a leasehold reform ticket. Well, as we all know, Boris tranced Jeremy in the election and we have a Tory government for the next few years.

Does that make leasehold reform more or less likely? Time will tell.

We can end on a high note if you believe this kind of nonsense. In December’s post-election Queen’s speech, the following was said about leasehold reform:

“The Government is taking forward a comprehensive programme of reform to end unfair practices in the leasehold market. This includes working with the Law Commission to make buying a freehold or extending a lease easier, quicker and more cost effective – and to reinvigorate commonhold and Right to Manage.

The Government will ensure that if a new home can be sold as freehold, then it will be. We will get rid of unnecessary ground rents on new leases and give new rights to homeowners to challenge unfair charges. The Government will also close legal loopholes to prevent unfair evictions and make it faster and cheaper to sell a leasehold home”.

Will 2020 be the year feudal leasehold is finally consigned to the history books and all those parasitical freeholders join the dole queue? Let’s hope so. For all of us who believe leasehold is an unjust, unfair and unfit system of land tenure, it’s our job to keep the pressure on government to honour their endless promises. Only by keeping leasehold in the spotlight will we achieve our aim.

On a personal note I would like to thank the absolutely brilliant LKP for all their hard work and constant pressure on all those who work to keep leasehold in place. They remain unintimidated by the power of the freeholders; they are fearless and indefatigable. We would be nothing without them.

Also, to the tireless work of Katie, Cath and Jo and the fabulous NLC supporters. This issue would not be where it is now if it wasn’t for these amazing women and their 24/7 Amazonian efforts. Thank you and I hope you can all have a relax over Xmas, you have well and truly earnt it.

I write about what I'm interested in so the blogs will be random. I am an activist against the Leasehold System in the UK. I help run two charities that promote young people through music and help provide a positive focus in their lives. I work with homeless charities and I am a republican. I am also a devout nihilist. View all posts by barcode1966